Ozone is one of the most abundant molecules in the Earth’s atmosphere. This is an introduction to ozone where you can learn about its fundamental properties.

Ozone is a molecule that consists of three negatively charged oxygen atoms. The ozone molecule is very unstable and has a short half-life, causing it to fall back into its original form. 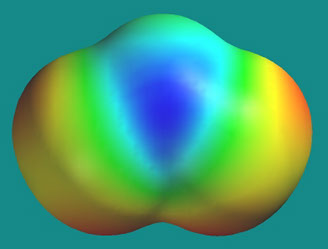 Principally, an ozone molecule is nothing but an oxygen molecule that has received an extra oxygen atom by electric high voltage. Ozone is naturally produced through certain types of chemical reactions. A well-known example is the ozone layer, which is created by UV rays (UV), which are emitted by the sun. Ozone is also formed during thunderstorms, in waterfalls, and – although this is a less natural process – in photochemical smog which forms in summer. In thunderstorms, ozone forms as a result of the high voltages that are involved. The specific fresh scent after a thunderstorm is caused by ozone formation.
When one speaks of ozone, the above-mentioned examples are immediately associated with it. It is however less known that ozone can be artificially produced so that it can be used for water treatment. Ozone generators can create ozone artificially by means of extremely high voltages or by means of UV light. Both methods involve the decomposition of the oxygen molecule. This causes oxygen radical formation. These oxygen radicals can bind to oxygen molecules, forming ozone (O3).

INTRODUCTION TO OZONE: AN OXIDANT THAT BURNS CHEMICAL COMPOUNDS

Ozone is one of the strongest known oxidants. It can be used to burn dissolved compounds (oxidation). The extra oxygen radical in an ozone molecule quickly binds to each component that comes in contact with ozone molecules. This is because of the instability of ozone and its inclination to return to its original form (O2). Both organic and inorganic substances may be oxidized by ozone (oxidation) and microorganisms such as viruses, bacteria, and fungi (disinfection). This causes the extra oxygen radical to be released from the ozone molecule and to bind to other materials so that only pure and stable oxygen molecules (O2) are left.

As a result of the above-mentioned reaction mechanisms, ozone can be used for a large variety of purposes. Ozone is mainly applied in wastewater and drinking water purification (for disinfection). The application of ozone in the industrial branch is increasing. The food industry uses ozone for disinfection and the textile industry uses ozone for color removal.
The most significant benefit of ozone is its pure characteristic. It only oxidizes substances, and as a result byproduct formation rarely occurs.