The ozone therapy method is an effective health method with great benefits of reducing and eliminating toxins from the body.

The presented materials were received in the Centre of Ozone Therapy (the city of Nizhny Novgorod) and Department of Ozone Therapy of Nizhny Novgorod State Medical Academy for the last 10 years have been involved in the study of therapeutic procedures, patients management, and post-graduate special training of doctors from Russia and other countries providing help in getting the necessary equipment.

Every year about 1000 patients undergo a course of treatment in the Centre of Ozone Therapy.

That makes it possible to carry out nearly all the known procedures using various methods of Ozone Therapy.

The procedures of major autohemotherapy are done according to the traditionally accepted methods. The plastic container is filled with 50ml of saline with 0,25 ml of heparin, to prevent blood coagulation and improve its flow property, and then with 100ml of venous blood. After that, the blood is saturated with ozone/oxygen mixture and sent back to the venous bloodstream.

Russian Medical Regulation Act does not require the medical personnel to have special training in transfusion medicine, for a doctor deals with a patient’s auto blood which excludes the possibility of any complications that might occur when dealing with the transfusion of donor’s blood.

To facilitate the procedure of Major Autohemotherapy in our practice we use a roll-type peristaltic pump with a microprocessor monitoring system making it possible to pump the blood and send it back to the venous bloodstream. The pump is designed to regulate the blood flow rate and is equipped with a safety system that prevents the possibility of air getting into the vein during the reinfusion with ozonized blood

THE PROCEDURE OF MAJOR AUTOHEMOTHERAPY

– However in Russia an alternative method to Major Autohemotherapy has become widely spread and more popular. It is known as drip intravenous injections of ozonated saline. The method is simple to use. Sterile saline on being Barbotaged with ozone/oxygen mixture in a flask is to be infused intravenously. (The detailed description is presented in the manual “Ozone Therapy in Practice” – www.ozonmed.ru). The method proved to be quite efficient and is performed with very low ozone concentrations(1-3mg/l) and doses(50- 600mcg)

– Any assumptions that sodium hypochlorite is formed on ozonizing the saline were found to be irrelevant. There were carried 3 special trials which revealed the amount of hypochlorite to be too insignificant to produce any influence on the human body.

the efficiency of ozonated saline

First of all, as a variant of acupuncture, where alongside ozone therapy produces a general immunomodulating effect, ozone/oxygen mixture is injected into biologically active points, which significantly increases the effectiveness of treatment. For example, below we present the schemes to use biologically active points, which proved to be very efficient in the treatment of bronchial asthma and diseases of the gastrointestinal tract. 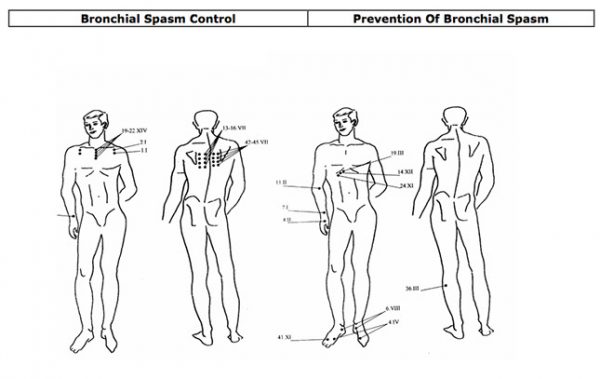 Thirdly, ozone/oxygen mixture is used subcutaneously in cosmetology to treat cellulitis, with extensive problem zones being injected with up to 2,5 -3,0 l of gas. Intracutaneous injections of gas mixtures are successfully used to get rid of wrinkles and improvement of aged skin.

External Gazation with ozone/oxygen mixture in plastic bags is commonly used in the treatment of purulent wounds, burns, and long-healing trophic ulcers. However, this procedure is used in obliterating lesions of lower limbs without evident ulcers. Oxygen was found to penetrate intact skin and decrease tissue hypoxia responsible for the disease severity

The procedure of external Gazation with ozone/oxygen mixture in plastic bags is carried out in addition to major autohemotherapy or drip Phleboclysis of ozonated saline which saves the time of the treatment procedure.

The procedures of external Gazation are effectively used in otolaryngology, being easy to perform and giving efficient results.

In cases of Otopyosis or fungal otitis the procedure of external Gazation is done with the use of an ordinary ear- stick with a cotton tip. Before the procedure, the ear canal is to be healed with a damp cotton plug. Then an ear stick is taken, and a cotton tip is to be wet and inserted into the ear. A needle with a 10ml syringe is inserted into another tip and an ozone/oxygen mixture, ozone concentration being 5-7mg/l is slowly introduced into the ear duct as shown in the picture in the next slide. The procedure is to be done every day up to 5-8 times.

In cases of sinusitis Gazation with ozone/oxygen mixture is performed in the following way. The nasal cavity is washed with distilled water or physiological solution by using a syringe. Then two 10ml syringes are filled with ozone/oxygen mixture, ozone concentration being 10mg/l. The patient is asked to take a deep inhale and hold up the breathing so that the gas mixture does not get into respiratory ducts. Then ozone/oxygen mixture from two syringes is intensively pushed through the nostrils (as shown in the picture in the next slide) and then the patient quickly closes the nostrils with fingers for 10 seconds upon which exhales through the nose and the mouth. The number of daily procedures is to be from 5 to 10.

It is advisable to teach your patients to inhale and exhale correctly and have a few training procedures without ozone/oxygen mixture before you start the treatment procedures.