OZONE CAN PROTECT THE FRUIT FROM DECAY FOR WEEKS AFTER EXPOSURE 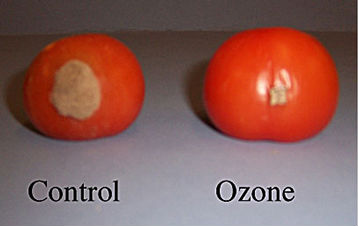 Scientists have discovered why fruit and vegetables last longer after being exposed to ozone.

Previous research revealed that exposing a tomato plant to environmental stresses such as a wound, drought or extreme temperature causes an increase in certain proteins.

The study, published in Postharvest Biology and Technology, explored the impacts of ozone on the amounts of certain proteins – called the protein profile – were present in tomato fruit, to try and unravel why low levels of ozone gas can protect fruit and vegetables from disease, and increase their shelf life.

‘Ozone has been used as an anti-spoilage agent for years, but while we know it works, we didn’t know why until this study,’ says Professor Jeremy Barnes, of Newcastle University, who co-authored the paper.

The team found that changes in the proteins observed when a tomato fruit was treated with ozone after it had been harvested were associated with defense and signaling responses.

‘The mechanistic relationships are still rather poorly understood but responses are believed to be associated with physical and chemical defense responses, as well as enhanced repair capacity,’ says Barnes.

‘Ozone has been used as an anti-spoilage agent for years, but while we know it works, we didn’t know why until this study’ Prof. Jeremy Barnes, Newcastle University  The scientists also showed that storage of fruit in enhanced levels of ozone inoculates it against pathogens for up to two weeks afterward, even once it is removed from the ozone-enriched atmosphere.

‘If you re-introduce a pathogen to a tomato that’s been given ozone it doesn’t grow anywhere near as voraciously as it does in a non-treated tomato,’ says Barnes. ‘One of the most surprising outcomes of our study is the fact that shifts in protein profiles were sustained for a short period following removal of the fruit from the ozone enriched environment and this was consistent with ‘memory’ or ‘vaccination effects’ reported by the authors – effects consistent with enhancement of product shelf-life.’

The researchers exposed the fruit to ozone and then introduced a pathogen, called Botrytis cinerea, which causes the grey mould you find on fruit in the bottom of your fruit bowl. The introduction of this pathogen causes several proteins to increase, but once the fruit is removed from the ozone they slowly drop back down.

The researchers had previously found that mimicking the ozone levels of a spring day in storage can suppress pathogens and increase the shelf life of fruit and vegetables like strawberries, , avocado and, asparagus, by a few days.

Ozone has been used as an antimicrobial agent to treat drinking water since the 1800s. But these findings show that only very low levels, no higher than that of an English summer day, are needed to observe the potentially beneficial effects.

‘ Any refrigerated environment is artificial, we use ozone to recreate the naturally oxidative outdoor environment’

‘Spoilage of fruit only really becomes an issue when you harvest them and put them into a storage environment. Any refrigerated environment is artificial, we use ozone to recreate the naturally oxidative outdoor environment,’ says Barnes.

The extensive testing on tomatoes discovered that this one treatment can prevent a whole range of pathogens from growing on the fruit, without affecting its taste or look.

Scientists have used this knowledge to develop a range of commercial products to protect crops from spoiling when they are in storage or being transported. Their product range, which was developed by a company called Biofresh, uses small controlled environment chambers, including a battery-powered smart pallet, which releases low levels of ozone and maintains the crop’s freshness during transportation.

The original idea to commercialize the product was based on the theory that a drawer could be incorporated into domestic fridges to increase the life of fruit and vegetables at home. But as Barnes and his colleagues have moved into the more commercial market, that drawer is still waiting to be invented.